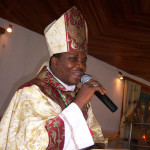 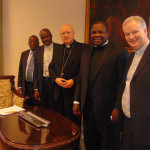 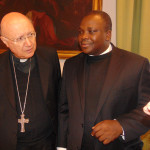 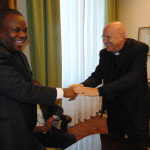 Most Rev. Dr. Emmanuel Adetoyese Badejo, Bishop of Oyo diocese, Nigeria, has been appointed the Chairman for Communications of the Symposium of Episcopal Conferences of Africa and Madagascar (SECAM). The appointment which takes immediate effect was contained in a letter signed by the President of SECAM, Archbishop Gabriel Mbilingi of Lubango, Angola.

The appointment of Bishop Badejo is seen as an attempt to revive the Pan-African Episcopal Committee for Social Communications, which has the acronym CEPACS, derived from the original French name: Comité Episcopal Pan-Africain des Communications Sociales. CEPACS which has been without a Chairman since 2004  was established in Ibadan, Nigeria, at the end of a meeting that took place from November, 28 to December 2, 1973 of African bishops in collaboration with the Pontifical Council for Social Communications and Stem Van Afrika (Voice of Africa) in The Netherlands.

Some of the objectives of CEPACS-SECAM Communications are:

1.     To stimulate, promote and coordinate the Church’s mass media activities in Africa both on the regional and the continental levels.
2.     To promote the Christian dimension by the use of all aspects of the mass media in the evangelisation process, which includes the integral development of the human person.
3.     To foster good relation with both Christian and secular media organisations at the regional, continental and international levels.
4.     To work in a very special way and in close collaboration with the Pontifical Council for Social Communications and with Catholic International Organisations e.g. SIGNIS and CAMECO.
5.     To collaborate with other African and worldwide organisations which have relations with these Catholic International Organisations.

Bishop. Badejo, who is already Chairman of Social Communications Directorate of the Catholic Bishops Conference of Nigeria (CBCN), will be the fifth Chairman for SECAM Communications and was born on July 13, 1961. He had his secondary education in the Local Church Minor Seminary, he studied philosophy at the Regional Major Seminary of Ss. Peter and Paul which was affiliated to Nigeria’s premier university, the University of Ibadan, until 1980. He then went to Rome, Italy to undertake theological studies. In the summer of 1983 he pursued a Bible Course at the Hebrew University in Hadassah, Jerusalem. In 1984, he graduated with a Bachelor of Theology degree from the Pontifical Urban University in Rome. Bishop Badejo was ordained a priest in Osogbo, Nigeria, on January 4, 1986, where he served as an Associate Pastor for seven years. During that period he held many positions, for example: Diocesan Vocations Director, Assistant Diocesan Communications Director and Chairman, Diocesan Communications Director.

Bishop  Badejo, who exhibited great interest in Communications was given the opportunity to attend the International Catholic Union for the Press (UCIP) Summer University for journalists in Fribourg, Geneva in 1989. In the same year he received the Media in Your Country Award (UCIP Best Journalist Award) during the UCIP World Congress in 1989 in Ruhpolding, Germany.

He did further studies in the same field in Rome where he received a Licentiate in Communication Sciences from the Silesians University in Rome as the best student in his faculty in 1995. During his studies in Rome, from 1993-1994 he was the President of the Association of Nigerian Priests and Religious in Rome.

On his return to his diocese he was appointed in 1996 as the Secretary/Director of the Department of Communication of the Catholic Secretariat of Nigeria in Lagos; a position he held till 2003. During this period he founded and served as the First National Chaplain of the Catholic Artistes and Entertainers Association of Nigeria, (Film/Video) CAEAN from 2005-2006. He also served as the Administrator of St. Benedict Catholic Cathedral, Osogbo and became Vice President, Indigenous Clergy Association of Yorubaland.   In 2006 he spent a Sabbatical year in the US, returning to his country in April 2007 with the intention of writing a Doctoral thesis on the theme of Film and Spirituality.

However, on August 14th of that same year he was elected bishop of his old Diocese of Oyo and ordained on October 20, 2007.

Bishop Badejo who is also a musician and loves drama has produced the following:

“For a Clearer Sky” (Drama Publication, Rome, 1989); “In God’s Family” (Music cassette, on Christian Doctrine 1999); “The Broken Bread” (Video Documentary on the 3rd Nigerian National Eucharistic Congress, 2002. The rest are  “Take My Hands” (Musical advocacy CD on HIV/AIDS), 2003 and “Think About This” (Video Documentary on the Handicapped of Society for St. Mary’s Rehabilitation Centre, Ipetumodu, Osun State, Nigeria)

He is also a Columnist for some Nigerian national newspapers, regular guest on many audio visual programmes and a well-known preacher and speaker.
Issued by the Director of Communications, SECAM.