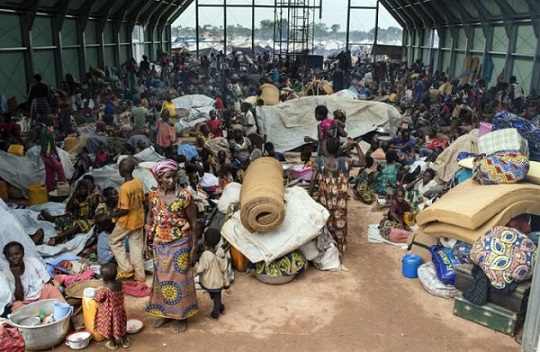 An attack against a peace concert in Bangui has escalated tensions in the Central African Republic, where a conflict with growing ethnic and religious undertones has caused the United Nations to pledge to increase its peacekeeping presence in the country.

The attack took place against a coffee bar known as “Au Carrefour de la paix,” (translated The Junction of Peace Bar) on November 11, leaving four people dead and twenty others injured, according to Fides News Agency.

The CAR singer Ozaguin was performing at the concert, when a grenade exploded.

According to Interior Minister, Henri Wanzet Linguissara, two individuals on a motorbike approached revelers attending the concert on Saturday night and threw a grenade into the crowd.

He confirmed that four people had died, and 20 others were wounded.

The singer himself was not hurt, but three members of his band were wounded and taken to the Bangui community hospital.

The cafe is located near the PK5 majority-Muslim district of Bangui, once a Muslim rebel bastion, and now home to several armed groups.

The country’s Prime Minister, Simpli-Mathieu Sarandji has condemned the attack as a “criminal act.”

“We still do not understand who committed this attack and why,” local Church sources told Fides.

“The situation remains very tense. Neighborhoods in the PK5 area have been emptied again, as in the days of civil war, and those who remained have built barricades to protect their homes and shops,” said Fides, citing sources in the country.

The grenade attack provoked reprisal attacks from Christian youths, who killed three Muslims on motorbikes, blaming them for the attacks.

This attack caused the Christians in the surrounding neighborhoods to flee, fearing reprisals from Muslim militants.

Fides reported that some young Christians who went to the KM5 to buy goods for their stores were stabbed and killed.

Young Christians and Muslims had organized the concert in a reconciliation effort.

A civil war that erupted in 2012 when President François Bozize was ousted by the largely Muslim Séléka rebel movement has caused tensions between the two communities. The Séléka rebels were later ousted from the capital by Christian militias, called Anti-balaka, which led to tit-for-tat killings between the movements.

Relative calm has reigned in the capital recently, even if tensions continue to simmer. The last major period of violence in Bangui was in February, when the military carried out an operation in the PK5 neighborhood.

But the recent attack demonstrates that durable peace is still far from being achieved in the country, with the religious dimension complicating the process.

It’s not a religious conflict

Church leaders in the CAR have traditionally cast the conflict as a fight over minerals, with nothing to do with religion.

“What we have in the Central African Republic is not a religious war,” the Archbishop of Bangui, Cardinal Dieudonné Nzapalainga, told Crux on the sidelines of the 11th Association of Episcopal Conferences of Central Africa in Yaoundé.

The cardinal called it “a political and economic war; people are fighting over land and mineral resources.”

But the conflict is increasingly being drawn along religious lines, even if religious leaders aren’t part of it.

Muslim communities in the southern region of the Central African Republic, for instance, have come under attacks from mostly Christian militias: The Catholic Bishop of Bangassou, Spaniard Juan José Aguirre Muñoz, has been sheltering the Muslims on the grounds of the cathedral.

The religious and ethnic dimensions of the conflict are fueled by geography, as well as the changing political fortunes of different communities.

The country is predominantly Christian, with 50 percent of the total population being Protestant and 30 percent Catholic. Only 15 percent is Muslim, the majority of whom live in the north of the country, which lies in Africa’s Sahel region. However, there is a significant Muslim population in the south, consisting mostly of merchants.

Every president has been Christian, until the Séléka rebels installed Michel Djotodia as the first Muslim president in 2013.

These dynamics morphed into the political realm. Since independence, politics had been dominated by Christians, but when in 2013, President François Bozize – a Christian – was overthrown in a coup led by members of the mostly Muslim Séléka rebels, the political landscape significantly shifted.

Michel Djotodia, the leader of the Séléka rebels was then installed as the country’s first Muslim President.

But Djotodia soon lost control over the rebels who brought him to power, and the Séléka militia committed untold atrocities: Murdering, maiming, and raping large numbers of people, especially those loyal to Bozizé.

Former members of the army then joined the Anti-balakas, which until then had been community-based vigilante squads. With military training and leadership, the Anti-balakas retook the capital, Bangui, on December 5, 2013.

They engaged in the same violent reprisals as the Séléka; first targeting communities suspected of being sympathetic to the Séléka, and then extending their murderous campaign to all Muslims.

Since 2014, the United Nations has enforced a precarious peace with a 12,000-strong peacekeeping force.

In 2015, Pope Francis made a trip to the country, and visited a mosque in Bangui in an effort to shore up the peace process.

Although militia violence continues in the south of the country, the capital has been relatively peaceful.

“The enemies of peace … have just set a trap,” Prime Minister Simplice Mathieu Sarandji said in a radio address after the grenade attack on the cafe. “I call upon the population not to slide back into violence.”

On Nov. 15, the United Nations Security Council extended the mandate of the peacekeeping mission for another year, while at the same time increasing the mission’s troop level by 900 military personnel.

UN Secretary-General António Guterres travelled to CAR in late October, and warned that political manipulation of religious divisions in the country “must be condemned and avoided at all costs.”