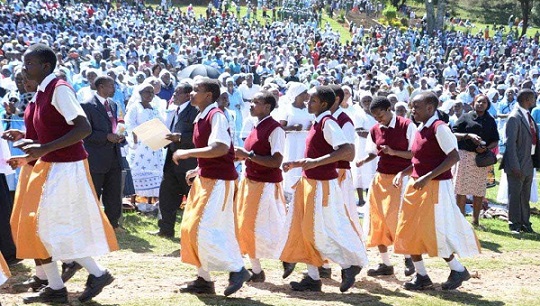 Archbishop Peter Kairo of Nyeri in Kenya has called on Kenyans to pray for peace and tranquility amid rising political temperatures in the country, some 10 months before the next general elections slated for August 2017.

Politicians in Kenya have engaged in very early campaigns, contributing to the rising of political temperatures across the country, some expressing fear of highly charged campaigns and potentially violent confrontations come 2017.

Archbishop Kairo made the appeal Saturday, October 8, as he delivered his homily during the celebration of the Holy Eucharist to mark the National Annual Prayer Day at the Marian Shrine Subukia, in Nakuru.

He cautioned Kenyans against repeating the mistakes that led to post election violence in 2007/2008 and encouraged the thousands of faithful who gathered at the Shrine to pray for free and fair general elections.

He urged the contestants and political leaders to avoid dividing Kenyans along tribal lines during their campaigns.

The Archbishop further called on Catholic Dioceses in the country to conduct civic education ahead of the general elections saying that this would enable Kenyans to vote for the right people without being compromised.

“Tell other people not to sell their voters cards,” he advised.

Quoting the theme of the day, “The Year of Mercy”, Archbishop Kairo called on all Christians to extend acts of mercy in their various capacities and to be instruments of peace in the nation beginning from the family.

The acts of Mercy include; feeding the hungry, giving shelter to the homeless, visiting the sick and the homeless, giving alms to the poor and comforting the sorrowful.  “Wherever there is a Christian, everyone should find an oasis of Mercy,” he said.

The National annual Prayer Day, which brought together more than 20,000 faithful from all over the Country, was organized by the Archdiocese of Nyeri in conjunction with the Kenya Conference of Catholic Bishops (KCCB) Commission for Liturgy and Commission for Pastoral and Lay Apostolate.