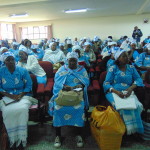 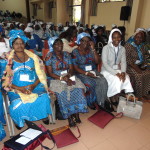 A section of the women 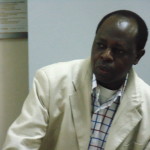 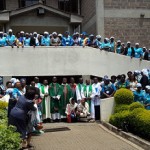 Group photo of the participants at the opening ceremony. They were joined by about 200 Kenyan women for the Mass 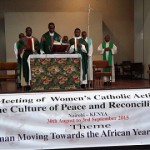 Fr. Odira, the main celebrant of the opening Mass of the Meeting


Catholic women in Africa have been asked to be more instruments and symbols for the promotion of peace and reconciliation in their families, communities and society, in general, particularly during period when Africa is in dire need of lasting reconciliation as a result of ethnic, tribal and political violence and conflicts.

The call was made by Rev. Fr. Charles Odira, Pastoral Care Coordinator for the Kenyan Episcopal Conference at the Opening Mass of the Pan-African Meeting of Women’s Catholic Action Movements on the Culture of Peace and Reconciliation that is taking place in Nairobi, Kenya from August 30- September 3, 2015. The meeting, on the theme: “The African Woman Moving Towards the African Year of Reconciliation” has 80 participants from eighteen African countries.

Fr. Odira pointed out that reconciliation is not about who is wrong or right but that of having the heart to reconcile with others without conditions. “Find a way to reconcile yourselves with your neighbours even in the face of resistance. As women and mothers use your power of persuasion and love to promote reconciliation in any situation that you find yourselves.” Fr. Odira appealed to them to reflect upon their lives and also understand that they have been given the opportunity by God to bring about positive change on the continent through reconciliation and peaceful co-existence. He stressed that reconciliation is neither taught nor does it come about by chance, instead it comes from the heart. “Do not just think about reconciliation among politicians, even members of the Church need it. Pray and work hard to get rid of the stigma on Africa as a continent of violence, conflicts and wars.” he concluded.

Earlier in his welcome address, the Vice Chancellor of the Catholic University of Eastern Africa (CUEA) Rev. Msgr. Pius Rutechura, noted that two years ago a meeting for Catholic female students from 19 African countries took place at the same venue, CUEA. He commended the Symposium of Episcopal Conferences of Africa and Madagascar (SECAM) for having organised this meeting in Kenya.

During the business session, Rev. Fr. Joseph Komakoma, Secretary General of SECAM, said that without the engagement of women in many responsibilities in the Church, there would not indeed be a vibrant Church in Africa. He also observed that in all aspects of the pastoral work of the Church, at parish and diocesan level in particular, women excel in their commitment and are numerically and qualitatively, without doubt, more efficient and effective among the laity. He added that it was for this role by women in the Church, and in society, that the Bishops of Africa and Madagascar in one of their resolutions of the 16th SECAM Plenary Assembly emphasised the importance and role of women in the work of evangelisation and reconciliation in Africa.

“In African culture, women are most respected partners in terms of education of children as well as the whole of society, especially for the culture of peace and reconciliation, therefore in bringing together the representatives of Women’s Catholic Action Movements, SECAM wishes to work with these leaders to reach out to as many women as possible for the success of the African Year of Reconciliation which runs from July 29, 2015 to July 29, 2016.” He added.

Fr. Komakoma said that it is the expectation of SECAM that the Catholic women in Africa would not continue to exist only within the auspices of the World Union of Catholic Women’s’ Organisation (WUCWO) but would also come up with an Association for women at the continental level.

Prof. Laura Wangai an Executive member of the Catholic Women Association of the Archdiocese of Nairobi, Kenya, made a power-point presentation of her Association which could easily be adopted as model body in Africa. The 15,000 members of the Association have a number of projects which include the construction of a St. Monica Group of Schools; self-reliance and fund-raising activities; charity works in the realm of education, health insurance and other welfare needs of members.

A paper on the Political, Economic and Socio-cultural Context of Africa Today was presented by Rev. Fr. Rigobert Minani, SJ, Director of the Jesuits Peace Institute in Nairobi, Kenya. He gave an overview of the various stages of the chequered development of Africa and the challenges still militating against the continent. He noted that even though some African countries have the fastest growing economies in the world there is very little to show for it due to high levels of poverty, unemployment and the high neglect of the youth. This, he said, is a real paradox as a result of very weak democratic, judicial and economic institutions on the continent.

“If the men you have been voting for are not improving our lot, it was high time you as women decide to put your hands to the wheel to salvage our bleak situation by voting women to occupy decision-making places in the political sphere.” He advised them.

The three-day meeting has been organised by SECAM with the support of MISSIO, Aachen, Germany, and the Solidarity Fund of the United States Conference of Catholic Bishops (USCCB), two of the Partner Agencies of SECAM and hosted by the Association of the Member Episcopal Conferences of Eastern Africa (AMECEA).