A Roundtable Discussion for Peace in South Sudan and DR Congo 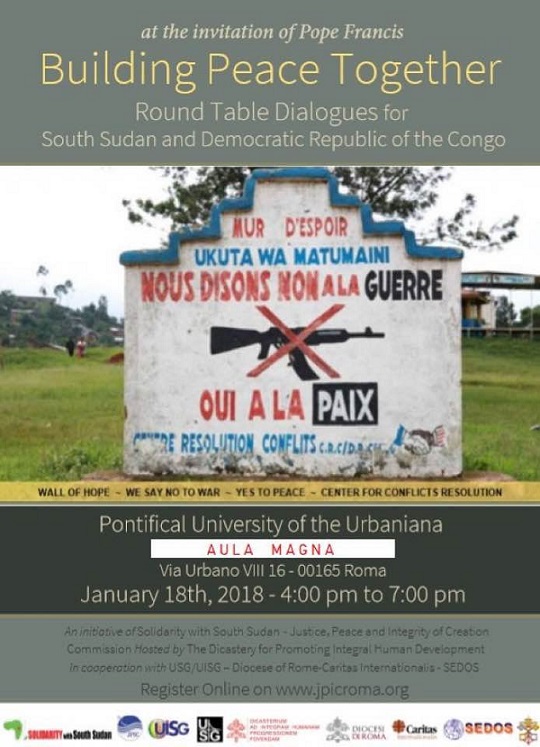 A Roundtable Discussion for Peace in South Sudan and DR Congo

The ongoing violence in South Sudan and the Democratic Republic of Congo (DR Congo) are two armed conflicts that are a source of constant worry for Pope Francis. Last year, 2017, Pope Francis was forced to postpone his announced visit to South Sudan because of the violence. Nevertheless, the Holy Father continues to keep South Sudan and the Democratic Republic of Congo in his prayers and in mind. In November last year, Pope Francis promoted a special prayer for peace in the two countries. The vigil prayer was held in the Basilica of St. Peter.

The Joint Commission of the Union Superiors General (USG) and the International Union Superiors General (UISG) “Justice, Peace & Integrity of Creation” and “Solidarity with South Sudan” are this week holding a roundtable discussion that will bring together men and women religious for a panel discussion. The idea is for roundtable dialogue hosted by the Holy See’ Dicastery for Promoting Integral Human Development.

The roundtable dialogue takes place, this week, at the Pontifical University Urbaniana.

Although conflicts in the two countries are not making headlines in mainstream media, the Church wants the suffering citizens of these countries to know that they are not forgotten.

Among notable speakers will be Bishop Eduardo Hiiboro Kussala of Tombura-Yambio and President of the Sudan Catholic Bishops’ Conference (SCBC), Michel Roy, Secretary General of Caritas Internationalis and Archbishop Marcel Utembi Tapa of Kisangani. He i salso the President of the National Episcopal Conference of Congo (CENCO).

According to a communique released to Vatican Radio, participants at the Roundtable discussion will experience a sensitive and faith-filled panel discussion around the importance of being committed to personal peace, attentively living in harmony and consciously maintaining peace.

Cardinal Peter Turkson, Prefect of the Dicastery for Promoting Integral Human Development, will open and close the event.