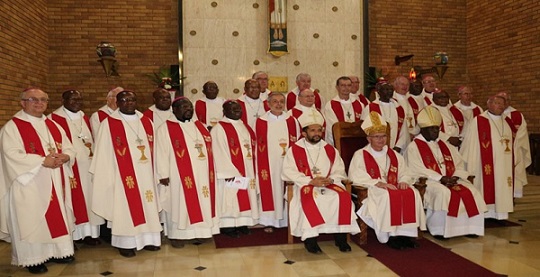 During the afternoon of 24th January 2018, the SACBC Plenary was keeping its focus on the evaluation of the Mini World Youth Day which was held in Durban – South Africa on the 03 – 10th December 2017. During his evaluation Fr Mthembeni Dlamini, the SACBC National Youth Chaplain, thanked the SACBC Bishops for the great support they gave to the young people to attend the event.

In spite of the challenges that came up during the event, Fr. Mthembeni said that the general feeling of the young people is that the Mini World Youth Day went very well and young people appreciated the experience they were given, and their wish is that the event of the same nature should be organised sooner.

Fr Mthembeni also thanked all different organising teams who worked hard for two years to make sure that event of Mini World Youth Day becomes a success. He said that there were challenges in the beginning of organising for the event but he is happy that at the end all went well with different teams cooperating well to make the event a great success.

The Bishops thanked Fr. Mthembeni and all the teams that worked hard to make sure that event is a success. Some of the Bishops who were there for the event also appreciated the good work which was done by SACBC Secretariat and other organising teams. They said that the event was great.

Fr Mthembeni said that SACBC now has to give attention to the World Youth Day which will be held in Panama in January 2019. He also appealed to the Bishops that they have to give the best to the young people by choosing best chaplains for them, so that there is a good working together of the SACBC Youth office and the dioceses.

The evaluation of the Mini World Youth Day comes after this morning address to the Bishops by His Excellency Archbishop Peter, the Apostolic Nuncio to South Africa, Botswana, Swaziland, Lesotho and Namibia, who also emphasised to the Bishops the importance of taking care of young people.

Archbishop Peter Wells congratulated the SACBC Bishops for giving such importance to the ministry to the youth. He also emphasised that the Bishops should be vigilant in making sure that the safeguarding of the children and protection of minors should be one of their main priorities, as the Church continues to stand strong and unshaken against the abuse of the vulnerable.

The evaluation of the Mini World Youth Day was ended with the discussion on the way forward about the event of the same nature in the future, and the outcome will come later after the plenary.