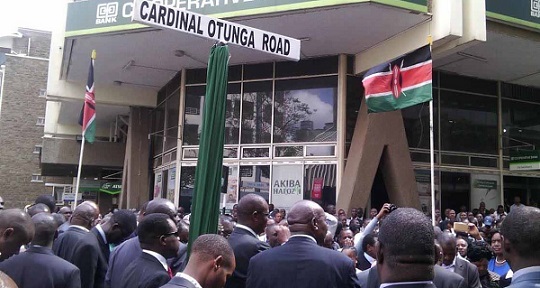 The Government of Kenya through the Nairobi County has named one of the capital city’s roads after the Servant of God Maurice Michael Cardinal Otunga, in cognisant of virtues that he stood for.

Speaking during the unveiling of Cardinal Otunga Road near the Holy Family Minor Basilica adjacent to City Hall Annex, John Cardinal Njue thanked the County Government of Nairobi under the leadership of the Governor, Dr. Evans Kidero for naming a section of the street after the Servant of God, saying he is a moral icon worth of the honour.

“May the street prompt us to emulate Cardinal Otunga’s exemplary life of prayerfulness and humility; may his intercession merit the city of Nairobi and the entire country, God’s protection and abundant blessing. Cardinal Otunga will continue to speak to the people of Nairobi and all Kenyans through his great virtues of courage, good cheer, care and concern for others,” Cardinal Njue Said.

Cardinal Njue prayed for all Kenyan leaders to shun tribalism and racism and urged them to strive to bring unity to the country so that they can leave a meaningful heritage for generations to come just as Cardinal Otunga who stood for honesty, simplicity and care for the less fortunate in the society had done.

On his part, the Governor of Nairobi County, Dr Evans Kidero, said his office recognised the Servant of God as a spiritual hero since he left the world a better place than he found it and the least they could do were to name a street after him.

Kidero called on leaders to be as caring and just as Cardinal Otunga was, adding that, such deeds would bring prosperity for the nation. He condemned acts of bribery and corruption among some leaders whom he said destroy the Country.

Echoing Cardinal Njues sentiments, the Governor called on Kenyans to be united before and after next general elections of August 2017.

“We are Kenyans after an election, but before, we retreat into tribal cocoons. Do not let elections divide us. Be one.” He appealed.

Cardinal Maurice Michael Otunga died on 6 September 2003 at the age of 80 having served the Catholic Church for over fifty years. The cause of the beatification of Cardinal Otunga started in 2009 and documents have been lodged with the Congregation for the Causes of Saints in Rome.