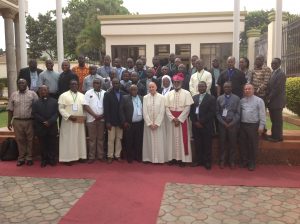 The Apostolic Nuncio to Ghana, Most Rev. Jean-Marie Speich, has emphasised the need for priests and other Pastoral Agents in the Church to adhere to the teaching of the Church in all spheres of their endeavours.

This was contained in a welcome speech he delivered at the opening ceremony of a meeting of Secretaries General of Regional and National Episcopal Conferences that is taking place in Accra, Ghana from February 29 to March 4, 2016. The Nuncio further asked the Secretaries General to be attentive to the message of Christ and to remain close to the Church. “Share with each other your experiences in the spirit of love and in the interest of the good of the Church without concentrating only on your national interests.” He added.

The Pope, the Nuncio pointed out,” is very interested in the Church in Africa and for that matter in the activities of the Symposium of the Episcopal Conferences of Africa and Madagascar (SECAM). He therefore appealed to the Secretaries General to collaborate with the Apostolic Nunciatures in their various countries in the continent of Africa.

In his keynote address, the Archbishop of Accra, Most Rev. Charles G. Palmer-Buckle, welcomed the participants in the name of the Ghana catholic Bishops’ Conference (GCBC). He reminded them about their roles as Secretaries General of Episcopal Conferences and likened them to that of ‘co-pilots’ who are to assist their bishops in managing the affairs of the Church at the national, regional and continental levels in Africa. “You have challenging tasks but the Good Lord will give you the grace and strength to be of greater service in bringing the Church in Africa to the point where God wants it to be in union with the Universal Church.” He urged them to be tactful and humble in the discharge of their duties.

Archbishop Palmer-Buckle who is also the Treasurer of SECAM took this opportunity to appeal to the Secretaries General to conscientise their bishops to pay their levies to SECAM to enable it provide efficient and effective service to the Church in Africa. He also reminded them about a decision taken by the Plenary Assembly of SECAM for a collection to be taken throughout Africa during the Continental Year of Reconciliation that runs from July 29 2016-July 29, 2016.

Regarding the Catholic News Agency for Africa, Archbishop Palmer-Buckle explained that it is a project initiated by SECAM to serves as a platform for the Church in Africa to tell her own story. He therefore asked the participants to help get benefactors for the project.

Twenty-six Regional and National Episcopal Conferences are taking part in the meeting which includes only one female; Rev. Sr. Hermenegild Makoro, Secretary General of the Southern Africa Catholic Bishops’ Conference.