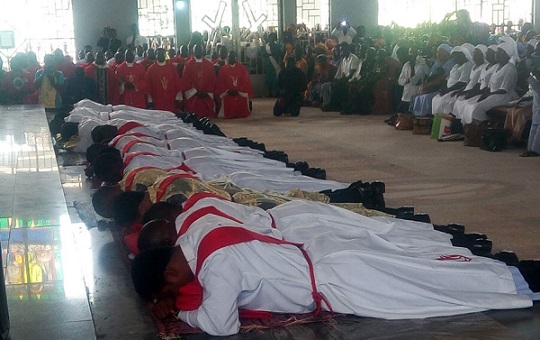 Archbishop Valerian Okeke of Onitsha Archdiocese has called on the Catholic faithful not to constitute obstacles to priests but to help them be good priests by offering them pieces of advice when in need, praying for them and offering them material support.

The Archbishop made the appeal during the ordination of nine Spiritans and two Conceptionists on Saturday, July 28, 2018 at SS Peter and Paul parish, Aliade, Benue State, Nigeria.  The Archbishop also ordained eight deacons, all Spiritans belonging to Province of Nigeria North-East.

In his sermon, Archbishop Okeke reminded the newly ordained of their status in the church – they are special friends of Jesus, people of the inner circle who are called to sacrifice their lives in the footsteps of Christ for the salvation of souls.

According to the Archbishop, friends have something in common, they share common interests. Therefore, as priests, they are configured in the person of Christ, as St Paul would say, it is no longer I who live, but Christ lives in me, thus the new priests were to consider themselves as dead to themselves but alive in Christ and should therefore act as Christ would in any situation.

“To be priests after the heart of Christ, you must imitate Christ who was chaste, poor and obedient, the Archbishop advised those he ordained, adding in reference to Jesus Christ, “Visit him in the Blessed Sacrament, read the scriptures as St Jerome says to be ignorant of the scriptures is to be ignorant of Christ, pray the office, engage in spiritual reading and be men of prayer.”

Using the image of an adapter that brings current to electrical appliances when connected to the source of power, Archbishop Okeke said unless the newly ordained are connected to Christ in prayer, they cannot be effective ministers.