SECAM congratulates the people of Gabon for 175 years of Catholicism

The President of the Symposium of Episcopal Conferences of Africa and Madagascar (SECAM), His Eminence Philippe Cardinal Ouedraogo, Metropolitan Archbishop of Ouagadougou – Burkina Faso has on behalf of the Bishops of Africa and Madagascar, congratulated the members of the Church-Family of God in Gabon and the entire Gabonese people, as they celebrate one hundred and seventy-five years of the Catholic Evangelization in the country.

He made this known during the thanksgiving Mass to climax the year-long celebration in Gabon on the 29th of September 2019.

He acknowledged the positive impact of Catholicism in the country as demonstrated by the large number of faithful Christians and the splendid growth and achievements of the Catholic Church in Gabon. He praised the missionaries who braved the seas and climbed the mountains of the country, often in painful and dangerous circumstances to bring the Good News of salvation to the Gabonese.

Cardinal Ouedraogo added that the deep roots of the Catholic Church and the positive impact of Catholicism in Gabon are also the fruit of the cumulative, persistent and dedicated efforts, past and present, of the generation of evangelization; “and since we are celebrating 175 years of Catholicism in your country, we must remember all these people”. Cardinal Ouedraogo further expressed gratitude to “all the priests, the consecrated, the nuns, the catechists and all the committed laity, men and women who generously sowed the Good News of Jesus Christ and worked tirelessly to make known his name in Gabon. ”

He urged the citizenry to as part of the achievements of the Church; “ensure that there is unity of the sons and daughters of the country, peace and understanding, tolerance and coexistence as well as equality of all the citizens before the Nation”.

Like other countries of the subregion and on the African continent, Gabon is rich in oil and many other natural resources, but a large proportion of the population is scandalously kept in poverty. The President of SECAM thus indicated that “inequalities, poverty and injustice are signs not only of a deep lack of fraternity but also of the lack of a culture of solidarity. “Quoting from Sollicitudo rei socialis, 1987, he said “We all have a duty here to build a nation or “community that allows everyone to reach their full potential, respecting the dignity, rights and responsibilities of everyone, making the world a livable place”. 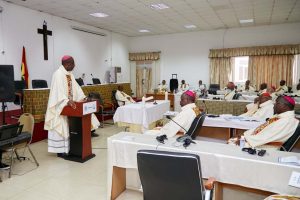 The Cardinal further invited all the pastoral agents of Gabon (bishops, priests, religious, catechists and laity) to recommit themselves to sow faith. In doing so, you have to face the needs of people, especially the poor, in this life, and not just to prepare them for eternity as Pope Francis requested.; in particular, everyone needs access to good education, health and employment.

He finally called on all other Gabonese, especially young people to use the anniversary as an opportunity to remember God’s love for all and how precious they are to God.

We encourage you to seek to do good and fight for it, not only for yourselves but for others as well.