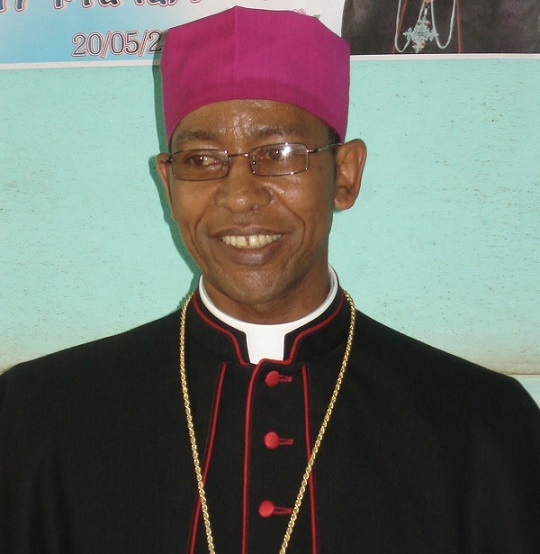 Two weeks before arriving in Ohio on a nationwide pastoral visit, Bishop Fikremariam Hagos Tsalim of the Eparchy of Segheneity, Eritrea, got word that eight young people from his eparchy died trying to make their way to Europe in search of a better life.

About 190 Eritreans died trying to cross into Europe in February alone, he said. The poor migrants usually make their way to Libya, where traffickers demand steep fees to herd them onto a raft that will set sail to southern Italy. Too often the shabby rafts sink in the Mediterranean Sea and the migrants perish.

Bishop Tsalim, 46, was at St. John Chrysostom Parish in Columbus, Ohio, in early March visiting the Eritrean Catholic diaspora who have been worshipping with the Byzantine Catholic community since 2014. He is the first bishop of the Segheneity Eparchy, which was established in 2012.

The bishop’s U.S. visit was his second in five years to raise funds for pastoral projects, including the construction of a chancery and a bishop’s residence. Plans to build a high school are on hold as the eparchy awaits a government permit to break ground, he said.

In January 2015, Pope Francis established the “sui iuris” (self-governing) Eritrean Catholic Church to facilitate pastoral work, bringing the number of Eastern churches in the Catholic communion to 23. The Eritrean eparchies previously were part of the sui iuris Ethiopian Catholic Church.

The Eritrean and Ethiopian churches are of the Ge’ez rite, a subgroup of churches that celebrate Alexandrian-rite — or Coptic-rite — liturgy but in the Ge’ez language. Ge’ez, much like Latin or Church Slavonic, is no longer in everyday use.

However, the political strife between Eritrea and Ethiopia in recent decades has made it difficult for the bishops of both churches to meet and plan pastoral work and so a separate church was needed, Bishop Tsalim explained.

In addition to evangelization, Bishop Tsalim’s pastoral priorities include improving social conditions of the people in the eparchy. He said he also often talks with teenagers to convince them to remain in Eritrea to study and help improve the situation at home.

Bishop Tsalim joined the three other Eritrean Catholic bishops in issuing a pastoral letter in May 2014 that criticized the poor living conditions in Eritrea that cause mass migration.

“There is no reason to search for a country of honey if you are in one,” the bishops wrote.

The letter called on political leaders to improve the judicial and economic systems so that human dignity is respected. It was a bold summons in a country where Catholics make up about 5 percent of the population.

Bishop Tsalim said the Eritrean bishops stand by their letter and are working to develop the country through various clinics, schools and projects for the promotion of women under the church’s charge.

Despite such efforts, teens still do not see a future in Eritrea. Children as young as 15 or 16 leave their families despite the well-known dangers of the crossing, he said.

With so many young people gone, the church also faces the challenges of a vocations shortage and an aging church.

The diaspora in the U.S. instead is young, with most of them having been in the country for less than 10 years, he said.

“They are trying to settle themselves and to get something (good) for themselves,” he said. “Everybody here is living hand to mouth. It is not easy for the Eritrean community.”

Bishop Tsalim said he has been encouraging the diaspora to keep their connections with the church and community in Eritrea.

“We need them and vice versa,” he added.

He also said he has encouraged them to gather, worship together and teach their children the Catholic faith. He acknowledged the challenges of enculturation and integration for Eritrean immigrants.

“Their children, when they grow up here (in the U.S.), their culture and language is American. Then, in one family, there are two cultures to reconcile. These two cultures, especially for illiterate immigrants, is a little bit difficult,” he said.

For high holy days, about four times per year, an Eritrean Catholic priest comes from another city to celebrate a Ge’ez-rite liturgy for the Columbus diaspora, said Michael Hailu, a member of the local Eritrean community.

Hailu said his community sought to worship at a Byzantine-rite church because its liturgy is more similar to the Ge’ez liturgy. Although they worship in a Byzantine Catholic church, Eritrean Catholics in the U.S. fall under the canonical jurisdiction of Latin-rite bishops.

Currently, only eight priests in the U.S. have the faculties to celebrate the Ge’ez-rite liturgy. Given the need, Bishop Tsalim said he would be open to an American priest learning the Ge’ez liturgy and becoming biritual to serve the diaspora.

About 3,500 Eritreans live in central Ohio; about 150 are Eritrean Catholic.